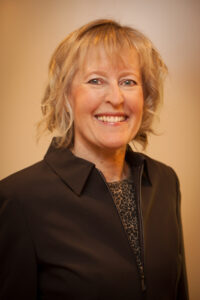 Bursting with joy, drama, and hope, Amy Riebs Mills’ music shines with melodic beauty, rhythmic intensity and harmonic richness, and has been enthusiastically received around the world. Mills writes large scale, chamber and solo works which have been performed in foreign capitals, at international festivals, and throughout the USA. A trail blazer as a woman composer and conductor, Mills founded the National Women’s Symphony in Washington, DC, served as the first woman commander/conductor of the United States Air Force Band and Singing Sergeants, and for 14 years was Music Director of the La Crosse Symphony Orchestra. She has guest conducted orchestras in Russia, Poland, Israel, Brazil, Mexico and around the United States, and her first orchestral  composition was premiered in Mexico.

Bursting with joy, drama, and hope –from the tragic to the sublime – Amy Riebs Mills’ music is known for its melodic beauty, rhythmic intensity and harmonic richness, and has been enthusiastically received by audiences around the world. Complementing a successful conducting career that has spanned over four decades, Amy Riebs Mills is increasingly in demand as a composer, writing in all genres, including orchestra and band, winds and strings, voice, chorus and piano. Her music has been performed by the state orchestra of Aquascalientes, Mexico and the US Army Orchestra, the Tacoma Symphony, the US Army Band, and at the International Women’s Brass Conference, the International Trombone Festival, the American Trombone Workshop.  She has guest conducted orchestras on four continents.  She has served on the faculty of the Conductors’ Institute at Bard College and frequently serves as an adjudicator and clinician.

In a Mexican debut, Ms. Mills conducted the world premiere of her five movement orchestral work, Ha Shamayim, (based on images from the Hubble telescope) with the Aguascalientes Symphony, in a concert broadcast on television and radio.

Megumi Kanda, principal trombonist of the Milwaukee Symphony, commissioned and premiered Ms. Mills’ virtuoso piece for trombone, Red Dragonfly, at the 2013 International Trombone Festival. And in 2015 Ms. Kanda premiered the band version at the American Trombone Workshop with the US Army Band. Red Dragonfly has received dozens of performances.  Kanda commissioned Mills to write a new virtuoso piece, Golden, which was premiered at the International Trombone Festival in 2021.

After hearing Red Dragonfly, Brian Hecht, bass trombonist with the Atlanta Symphony commissioned Catharsis for bass trombone and piano, and premiered the piece at the University of Texas, Austin in 2016.  Later the US Army performed the orchestra version at the American Trombone Festival.

Under the baton of Maestro Harvey Felder, Christmas Angels and Bells was premiered by the Tacoma Symphony in 2012, and orchestras around the U.S. have performed her pops arrangements.  She was commissioned by the Baltimore Holiday Brass to write an original work premiered at their 2014 concert. Chicago’s Sapphire Woodwind Quintet premiered New Dancing Shoes, Suite for Woodwind Quintet in 2015. And Shelley Waite premiered Advent Trilogy (Three Men of Christmas) in Morristown, Tennessee in 2015.

Amy Mills’ first string quartet, Flee!  Novella for String Quartet was commissioned by Sigma Alpha Iota and was premiered at the National Convention in 2022.

One More Mountain for Horn, Trombone and Piano was commissioned by Nathan Dishman and was premiered on the internet in early 2022, then performed live at the Iowa State University opening of fall semester faculty recital.

For fourteen seasons Amy Mills was Music Director of the La Crosse Symphony Orchestra in Wisconsin, where the La Crosse Tribune called her “a fireball of excitement and enthusiasm.”  Her improvements in the artistic quality of the orchestra brought unprecedented growth, including an addition of six subscription concert performances, a tripling of the budget, a quadrupling of the season ticket sales, a concert opera production, a collaboration with the local Native American community, an annual outdoor pops concert, a pre-concert show on Wisconsin Public Radio, a concerto competition, and the release of the orchestra’s first recording.

As a guest conductor, Maestra Mills made her Russian debut in conducting the Dubna Symphony Orchestra, and made her Polish debut conducting the Szczeczin Philharmonic.  She led the Israel Kibbutz Orchestra on a six-city tour in her first appearances in that country. Her South American debut was with the Rio De Janeiro Philharmonic, and her first Mexican appearance was with the Orquesta Filarmonica de Acapulco, followed by an engagement with the Orquesta Sinfonica de Aguascalientes. In the United States she has guest conducted the Acadiana Symphony in Louisiana, the Springfield Symphony in Missouri, the Arlington Symphony of Virginia, and the Traverse Symphony in Michigan. She led the Houston Symphony on a program for the presidential inauguration in 1988, and also conducted New York City’s Center Symphony, the Winona Symphony in Minnesota, the Pacific University Honors Orchestra, and the Tennessee Governor’s School Orchestra. She also served as cover conductor for the National Symphony Orchestra.

Ms. Mills founded and served as Music Director of the National Women’s Symphony in Washington, D.C., a professional orchestra featuring the music of women composers along with recognized masters.  After founding this ensemble in 1992, they performed world and American premieres of works by Libby Larsen, Pulitzer Prize winner Melinda Wagner, Jennifer Higdon and Augusta Read Thomas. The orchestra also collaborated with the Norwegian and Canadian embassies in presenting American premieres of women composers of their countries.

Prior to her appointment in La Crosse, Ms. Mills was the youngest Music Director of the U.S. Air Force Band, Orchestra, and Chorus. With these ensembles, she led a patriotic concert featuring Robert Merrill that was broadcast nationally on PBS and commercially released as a video. She also conducted other special performances featuring Wilford Brimley and Peter Graves. She was the first woman to serve as Music Director of the U.S.  Air Force Singing Sergeants, conducting the 27 member full-time professional chorus in over 350 concerts around the country, and in a featured performance at the 1988 Chorus America national convention, broadcast by National Public Radio.

Ms. Mills holds a doctorate in conducting from Catholic University, and a bachelor’s and master’s degree in music from Northwestern University, where she was the School of Music’s 1995 commencement speaker.  She continued her studies at the Conductors’ Institute, Tanglewood, and the Oregon Bach Festival, studying with Gustav Meier, Harold Farberman, Daniel Lewis, and Helmut Rilling. She has served on the faculty of the Conductors’ Institute at Bard College and frequently serves as an adjudicator and clinician.  She and her husband live on a lake near Washington, D.C.
Birth year:  1955

Bravo to Jemmie Robertson, Evans Haille and the Gainesville Orchestra for a beautiful performance of Red Dragonfly Concerto for Trombone and Orchestra! And thank you Gainesville audience for your warm welcome! ... See MoreSee Less

Share on FacebookShare on TwitterShare on Linked InShare by Email

Congratulations! Wish I was there!